A World Imagined by Signs 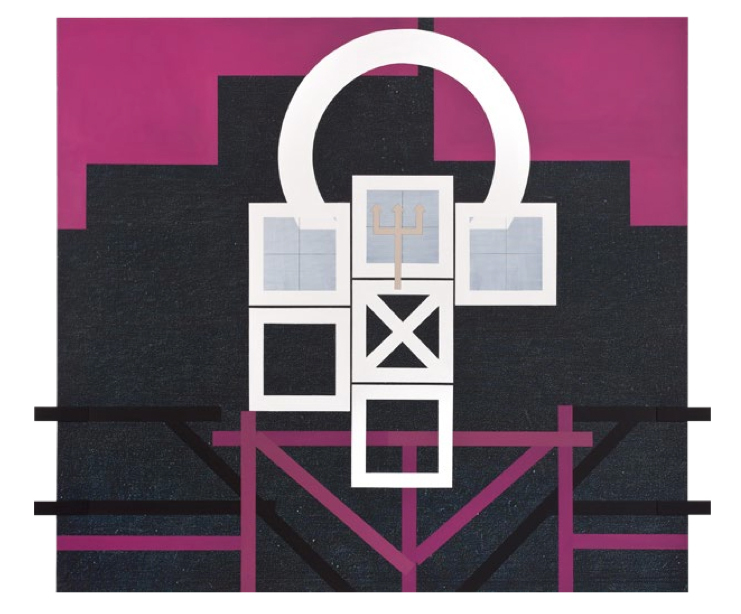 Art of Halil Akdeniz is a product of an experimental quest, where culture is comprehended through signs and embodied on the ground of ideational approach. It reveals a reinterpretation of history, culture, and language through symbolic codes in a process the contemporary art is reshaped. Especially the use of a variety of materials, elements incorporated into the canvas, a desire for transforming the given, and the radical transformation as formed in the relations to the space ensure that his foregoing endeavors are placed in a privileged position.

Although Halil Akdeniz started his career with a modernist painting approach, he experienced a rapid change of paradigm in time and diverged his art from that approach. Both the transformation in his relation to the surface of the canvas, and the questions he sought an answer as regards forming life as a cultural state had him focused on the processes of change, and thus, ensured the formation of a language that could be redefined in his artistic transformation. Indeed, we have witnessed through the above process that he has distanced himself from the principles of construct of the modernist painting and reoriented his approach towards a language preference based on repetition of sings and limitless potential of geometry. 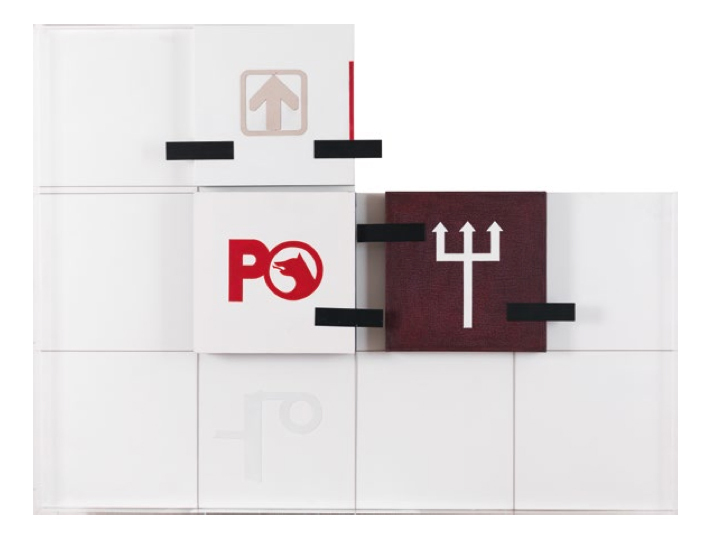 Even though his works are woven with contemporary/daily codes, they remain connected with the cultural background of our geography, and transformed the same into its own component by adopting it. The Hittite, Phrygian, and Greek cultures are the very cultures he traces in this geography and strives for making them of his own. Referring to the said cultures via symbols and signs can be said to have been associated both with a sense of belonging, and a need for a strong emphasis on culture. Yet, Halil Akdeniz has a universal perspective transcending also the Anatolian cultures. Both his use of symbols that represent today’s global problems, and his referrals to other cultures go beyond an approach by which we could otherwise identify him with the Anatolian cultures. As a matter of fact,  it is possible to see the reflections of his perspective in the Intercultural (Kültürlerarası) series. Therefore, the work of art becomes a channel that keeps the character of a multilayered history hidden in itself –with new components– and have us re-face to different cultural traditions. This historical journey through the layers not only introduces an inter-temporal/inter-cultural experience to the audience but also makes a deep-seated historical emphasis visible. Thus, an identity of multicultural life keeps on living in his works by transformation.

Naturally, there is a strong emphasis on culture in the works of Halil Akdeniz. Basically, the very reason he placed the culture in the heart of his works is the fact that culture is of a formative and life-determining character or that only through culture can life be analyzed and understood. Akdeniz is ultimately believes in relying on culture and thus he strives for a reliable prescription that is able to represent culture. He seeks for images that could be signs of the culture. A prescription that along with many variables would provide the invariable, the definite data that represent the purified, reduced state of knowledge. From that perspective, it is certain that we will encounter codes that provide direct relation to symbol, sign, and representation. Thus, the significance of symbolic codes is due to fact that the plainest state of the definite and convincing data representation carried by the codes is demonstrated.

In that respect one can say that art of Akdeniz has been built upon constructs that are associated with strong symbolic elements. The symbolic elements are essentially meaning-carrier, abstracted elements by which the data from social memory is encoded. As meaning-carriers they are both reliable, and maintain a formalistically reduced character. Akdeniz attaches importance to such elements for the depth and richness of meaning they carry. These symbols are mostly composed of letters, signs, and symbols belonging to the Anatolian cultures. Yet, such symbolic elements in the works of Akdeniz are transformed by evolution and become increasingly varied. Symbols representing different cultures, universal symbols, and global codes… This also paves the way for a richness and variety of meaning. In fact, it is obvious that not only what happened/lived in here, but also what is happening/being lived, what belongs to the day is considered important. Even it can be said that the interest in the daily becomes dominant in the process. It should be underscored that whether historical or daily, such signs acquire a structure matching up with the contemporary narrative language by spontaneous reproduction on the surface of the work they have produced and enable an associative setting. This is why such signs, each a cultural code-carrier, contain a rich interpretation potential with implications due to relations to the other. The association of languages, times, and meanings decipher the layered structure of the work of art. The daily and historical, the lived experiences and future imagination, reality and illusion, and play and fiction are intertwined. This in fact indicates the ground for a multiple cultural imagination. Accordingly, Akdeniz constructs the archaeology of an intertemporal relation and a multilayered, open-to-interpretation world of meaning by integrating those codes into his works. 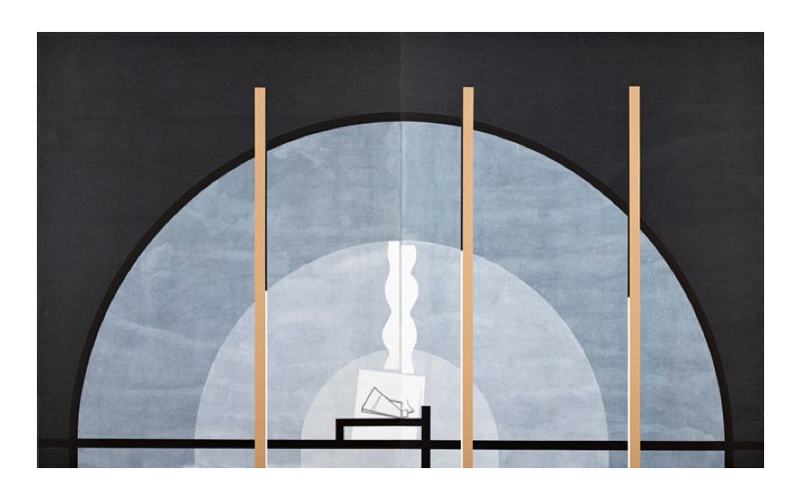 Detaching those signs from their relevant contexts, Akdeniz provides such signs with an effective visibility, sometimes in vast emptiness, and some other times in such constructs that he forms by repetitive reproduction. The fact that the said emptiness has a textural character particular to ancient works, reminds the time and history, when the events happened. The concepts of time, history, and emptiness are always in the works of Akdeniz. History is like a vast emptiness that brings together signs with rich meaning values. The said emptiness is also introduced as a plane, where the previous and future cultures are in contact and reconstructed. The work of art is a space for synthesis. A space that preserves the essential attributes of each time and culture, that assert an autonomous character… Yet, at the same time, a space for imagination, where dialogue with the other is possible... Here the works of Akdeniz turns out to be the ground, on which he transforms the aforementioned codes via their semantic and aesthetic relations and introduces the same in a new context. As if the dialogue of different temporalities… Just like the pluralist world envisage that enriches our world of imagination thanks to their existence…

The aforementioned multiple imagination is invigorated in the geometry as constructed by Akdeniz. In fact, it’s very hard to say that the foregoing is merely geometry. The modernist geometry, which emerged in the early 20th Century, was a fictive, design-related geometry that was stripped of its signifying attributes, with referrals to spirituality. Therefore, it would not be appropriate to assess the works of Akdeniz based on such an approach to geometry. It is necessary to differentiate the geometry as formed and constructed in his works from the modernist geometry, which is reduced to mere geometry, and which is centered on such geometry. In contrast, the geometry of Akdeniz corresponds to a structural schema, which is of referral character, which introduces contexts, and contains semantic codes. Rather than a geometry that only condones the forms, the geometry in question exists as a playground, which carries semantic codes similar to the other signs incorporated into the work of art, and which organizes the relations of, and positions all the other signs. What ensures the structural order of the relations in the work of art is a balancing factor that is often equivalent to the other signs. It corresponds to the naturalness of arbitrariness and surprises rather than a perfect order or an envisaged calculation. 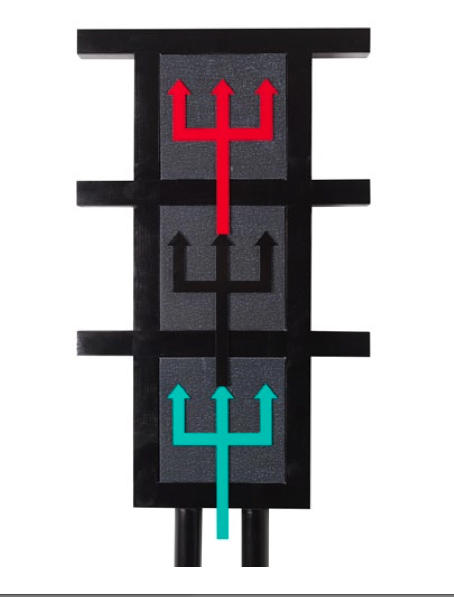 The aforementioned positioning of the work of art and the fact that it can be understood via a multiple assessment process can be emphasized by the other attributes of the work of art as well. For instance, the structures as incorporated into the canvas via constructive add-ons, transformation of the constricting external lines to make it a component of the language, or that the images acquire a sculpture-like character… The works of Halil Akdeniz adopt structural approaches diverging from surface perception. We see that the artist subjects ‘the given’ as regards the surface to a process of rethinking, questions it, and thus re-examines it. Therefore, it is observed that the flatness of canvas becomes insufficient in time, transforms and evolves into a process, which require thinking the same together with other add-ons. Therefore, the canvas becomes increasingly distant to a mere carrier character and the flatness is interrupted. The fact that both the flatness is transformed into depth at the bottom, and that it acquires dimensions and forms a physical volume towards the frontal panel is indicative of the evolution of the painting into a semi-sculpture-like dimension. Accordingly, flatness is no more the single determinant factor in the work of art. Now it is all about such concepts of plane-depth, emptiness-fullness, and therefore the space. The illusion stands together with that is physical, and that we witness Akdeniz transforming images into objects based on the interpretation of the said concepts. Sometimes we see them transformed into an arrangement on the wall surface as stripped of their contexts, and in some other times to an object that is associated with the surface. Incorporations, wooden constructions, metal connections, use of different materials, and method preferences… The infinite reproduction of similar signs on the surface and the strategy of being stacked up to neutralize each other is especially striking for they show the codes of today’s life culture. In fact, all are indicative of the fact that Akdeniz revenges the surface of canvas, transforms it within his own mythology, and as a consequence transformed his work into an eclectic organism as a heterogeneous meeting venue. 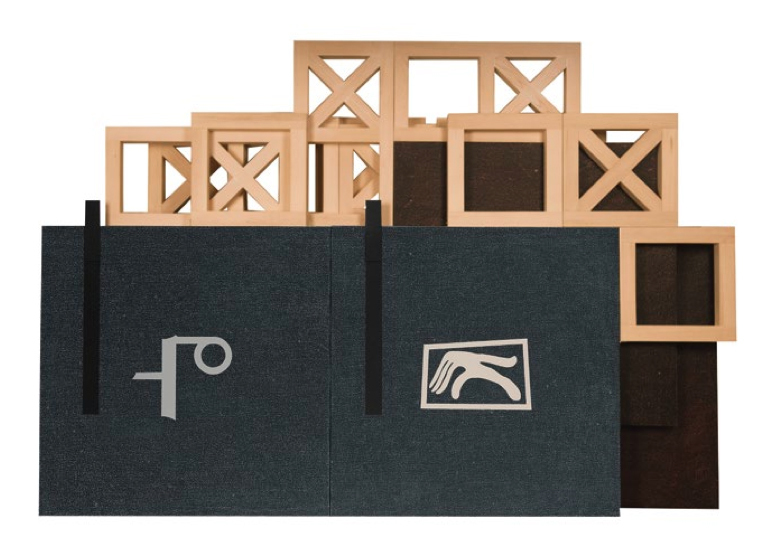 In conclusion, it can be said that since the 1980s Halil Akdeniz has produced new construct alternatives in the course of remaking his artistic language, aiming to further include the space into the work of art. This process initially started with appearance of segmentations and distinctive characters and techniques on the canvas surface and in time it evolved through constructions added on the canvas and variety of materials. Today it is radically transformed with expansion beyond the borders of the canvas and encompassing the space.